War. Diamonds and oil and war. If in the United S 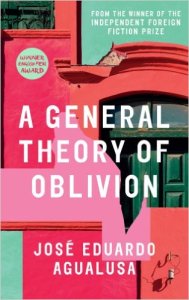 tates we’ve heard anything about Angola, it’s likely related to the protracted bloodshed or to the trade in oil and diamonds. The seventh largest country in Africa, situated on the Atlantic coast just north of Namibia, Angola became a Portuguese colony in the 16th century. Fighting for self-government began in 1961 and went on until the 1974 Carnation Revolution and the end of the Salazar dictatorship in Portugal led to the country’s withdrawal and, in 1975, Angolan independence. This did not end war in Angola, however….

Ludovica “Ludo” Fernandes Mano—whose true story became the basis for José Eduardo Agualusa’s novel, A General Theory of Oblivion—leaves Portugal and arrives in Luanda, Angola’s capital, months before Independence Day in 1975. She makes the move reluctantly, following her newly married sister, Odete, whose husband, Orlando, an Angolan mining engineer, works for a diamond company. A shut-in since early in her life (for tragic reasons that become clear in the second half of the novel), Ludo occupies her time cooking for the newlyweds and managing their luxury apartment on the 11th floor of a building in the center of Luanda. Life, even before the narrative turns dramatic, is a little too much for Ludo.

My review of José Eduardo Agualusa’s novel A General Theory of Oblivion, in full, appears in The Common.