Welcome to The Cove, a new Bay Area literary and art magazine — it enters the scene with the issue centered on Fire.

I feel privileged to have four (non-fire related) very short stories featured in this issue, alongside the work by Genine Lentine, Susan Griffin, Dan Coshnear, and so many amazing artists and writers.

lighted to have a short story of mine, “Doctor Sveta,” in the current issue of Alaska Quarterly Review. Here’s the opening,

Doctor Sveta was twenty six years old when the Navy commissariat summoned her to Leningrad and put her on a cargo ship among a motley crew of agronomists, agricultural engineers, livestock breeders, and tractor drivers, none of whom knew where the ship was headed or how long the journey might take. Her fellow passengers looked as confused at finding themselves confined to a seafaring vehicle as Doctor Sveta felt. No tractors accompanied them; not a cow, not even a single chicken. The agronomists and tractor drivers were healthy young men and a few women, two of them visibly pregnant. Doctor Sveta had been trained as a surgeon in Leningrad; she assumed it was in this capacity she’d been recalled from her post at a hospital in Minsk, Belarus. Besides the ship’s medic, there were no doctors aboard and not even a basic medical facility. Doctor Sveta worried she’d have to embrace a crash course in obstetrics.

Half a century later, as she tells me this story, Doctor Sveta . . .

This is a print magazine. To read the story, please buy the issue. 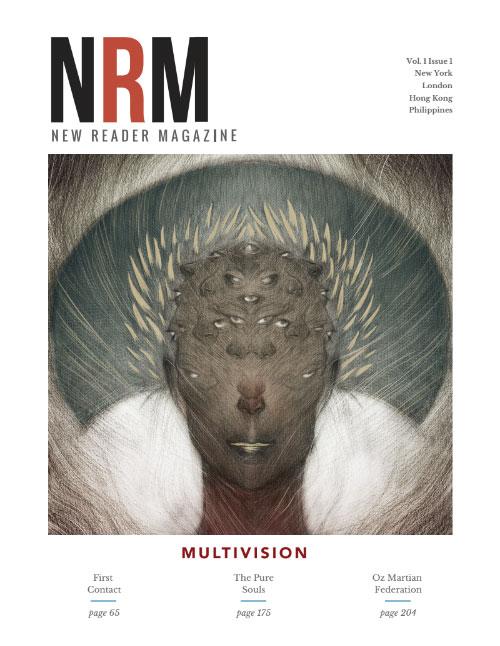 Here’s an experimental short, recently published in a brand new magazine. Welcome, New Reader Review! Download the copy of the magazine with my story here. (My story begins on page 204).

I. General Questions.
1.1. What is a consular district? I currently reside in Utah. May I seek assistance from the consulate in San Francisco?
1.2. Why am I unable to reach the consulate by phone?

IV. Registration of Legal Documents.
4.1. Will the consulate register a marriage between an American and a Martian?
4.4. My groom has a very demanding job and is very busy. We are unable to come in
person to the consulate in San Francisco to register our marriage. What do we do?

the museum of americana also published this story that’s near to my heart. I wrote it several years ago and kept tinkering with the ending — I didn’t want the connection between the two parts be too obvious, but I did want there to be several clear lines of connection, plus something else. After all this tinkering, it sure feels good to see this story out there.

“In sixth grade, I declared my love to a boy by slipping a homemade paper doll of David Bowie as Ziggy Stardust between the pages of the natural science homework I was giving him to copy. With the bright-eyed earnestness of first love, I believed I staked my entire future on the piece of cardboard decked out with a paper jumpsuit, a detachable red wig, and tall red boots—the details of the tricky costume carefully copied off a picture in TIME magazine.

“Thanks,” said Pete, grabbing the science notebook from my hands. “You’re a pal. I’ll give it back tomorrow.”

At home, when I’d been planning this handoff, I must’ve imagined it in slow motion and with deep significance to each word and gesture. . . .

My story Generosity is up on the museum of americana. I wrote this story some years ago, after attending an event, dedicated to Brazilian literature. Hearing the questions the visiting writers were being asked set my imagination reeling.

“The two Russian writers were young—billed as under forty—but in the month of touring the United States, they’d acquired heft and world-weariness. Seven days a week they answered questions: What does new Russian writing offer readers in the United States? and Do you see yourself continuing the great Russian novel tradition? . . .”

My story “Sick Babies” is out in Confrontation. Here’s the opening:

The baby’s sick. The mom brings him to the park every day, in late afternoons, and he sits limp in his stroller, dazed, unsmiling, eyes expressionless, pupils without any depth. The mom doesn’t seem to be aware of his condition. “Say hi to the gentlemen, Jacob,” she directs, rolling the stroller by the bench where we’re playing checkers. The baby doesn’t bat an eyelid. “He’s a little sleepy,” the mother apologizes. “It’s the weather we’ve been having.”

This afternoon, she parked the stroller right beside us, dropped her tattered backpack on a bench on the other side of the path, and took out a pack of cigarettes. She lifted the canvas canopy over the baby’s head, as though this were protection enough, and smoked one cigarette after another in rapid succession. We averted our noses, but, luckily, the wind blew the smoke in a different direction. True, some of us used to smoke in our youth, but it’s been long since that we’ve kicked the habit. The woman’s entire person showed signs of wear: unwashed hair going gray at the roots, tattoos on her arms looking ashen and flaccid, countless runs in the black hose. The baby stared right at us with his unseeing eyes.

Among ourselves, we’re convinced that the baby’s autistic, or worse. “Shouldn’t he be in some kind of an institution?” we debate.

I’m delighted to report that my story “Love and Hair” won Willesden Herald’s International short story competition. The award ceremony took place in London this week, and I took home the coveted prize: a large mug and a bottle of campaign. The story appears in an anthology, New Short Stories 9, together with nine other short-listed stories. I’ve been reading the anthology, and I’m so impressed with the competition.

Here’s the snippet from my story. The print anthology is available on Amazon US and Amazon UK.

The stage crew had been drinking since The Wizard of Oz Singalong the night before and now the director, suffering from a sinus infection, was losing her voice, pleading over the phone with actors calling in sick. This was a radical departure from the spirit of fun and camaraderie I’d expected when I volunteered to perform in an amateur production of The Vagina Monologues. During our final run-through just hours before opening night curtain, we were three actors short and had to find substitutes. I’d recruited half a dozen of my friends to buy tickets—and what if any of them actually showed up? The lack of professionalism embarrassed me.

As the rehearsal finally got underway, my phone buzzed. The house manager turned to me and hissed, animal-like, “What’s that?” She’d been getting on my nerves all afternoon, having berated me for bringing a burrito into the theatre and for daring to eat it while she talked to us about emergency exits. I ignored her and looked at my phone.

A text message: “I’m in San Francisco.” My new phone failed to decode the number, but I had a good feeling the text came from this girl Hana, an Israeli who lived in Portland.

On the first night I’d met her, Hana put her hand on my shoulder, gripping firmly, and said, “You look so Russian, Yelena. I’d love to seduce you.” Then she toasted me with whiskey and walked away.

My story Opera at the Ballpark appears in the current issue of Santa Monica Review. I wrote the first draft of this story in March 2010, after volunteering at a simulcast–an opera performance, broadcast from the live show at the San Francisco Opera to a screen at the AT&T Ballpark. Walking home after the show, I passed the opera house. The performance had long ended, and the homeless people were canvassing the house stairs.  I struggled to make sense of opera’s place in the social order of the New World. Of the hundreds of people who’d come to see the simulcast at the ballpark, many told me they’d never been to the opera house. The company was financially insolvent. In the aftermath of the financial crisis, a sense of doom was in the air. The simulcast was one idea to reach out to larger audiences and to give opera mass appeal. The opera they had chosen was traditional, and staged as though to mimic a 19th Century production. To me, this was fairly familiar territory and I was bored by it, but I was in the minority. Most of the simulcast attendees seemed to have had an amazing time.

The story came out of these disparate threads of thought.

After the soprano finishes her dying aria on the giant screen above the third base, and the audience sitting in the stalls (word choice?) and on the grass of the baseball diamond scorched their throats with shouts “Go, Tosca!” and clapped so loud as if they wished to be heard back in the opera house two and a half miles away (distance?), the screen went black and the baseball stadium emptied quickly. A warm breeze filled the air with the fragrance of the cherry trees blooming all over the city, lavish romantic music made us sentimental, its heroic overtones urged us to commit ubiquitous acts of kindness,—and conversation flowed freely. Several trains came to pick up the passengers and left overcrowded, while more people continued to shuffle onto the platform. We decided against taking the train, and slowly made our way downtown along the dark waters of the bay.

Seventeen revisions later, the first paragraph of the story published in Santa Monica Review’s Fall 2016 issue looks like this,

The final sounds of the soprano’s aria soar over the baseball diamond as Tosca collapses on stage projected onto the giant screen above second base. The audience sitting in the bleachers and on the grass explodes with shouts “Go, Tosca!” and applause almost loud enough to be heard back at the opera house two miles away. The screen goes black and everyone stands up, emptying the plastic cups of the last drops of beer and pushing cartons with the remains of cheese fries deeper under the seats. The simulcast is over. On the field, families pack up their picnic baskets and fold blankets.

Thank you, Andrew Tonkovich, for publishing this story and for helping me with the title. You can buy the issue and subscribe to the magazine on Santa Monica Review’s website here.