The word for freedom, eleutheria, is related to the border zone town of Eleutherae between Athens and Thebes, to art and religion, the history of the festival of the Dionysia and the emergence of classical tragedy. Pausanias reports that “the reason why the people of Eleutherae came over was not because they were reduced by war, but because they desired to share Athenian citizenship and hated the Thebans.” They carried with them the wooden statue of Dionysus, who initially was not accepted in Athens. According to the legend, the got from the borderlands became infuriated and brought plague to the city of Athens. This is how the festival of the Dionysia came into being. Subsequently this collective festival opened a space for individual creativity, transforming ritual into theater–a space where political and artistic eleutheria opened dialogues about the boundaries of the polis. Eleutheria is a freedom of the border zone–a freely chosen “immigration” and incorporation of local and foreign gods–that also gives birth to poetry and theater.

From Svetlana Boym’s Another Freedom, Chicago UP, 2010 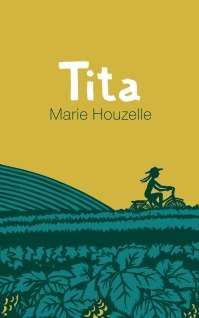 Occitania, a large region of Southern France that includes parts of Spain and Italy, has been for centuries crisscrossed by traders and traveling folk from the far reaches of Europe and Northern Africa. Its ancient language, Occitan or langue d’oc, a close relative of Catalan, was immortalized as early as the 11th Century by troubadours, the traveling poets, serenading chivalry and courtly love. Though annexed gradually in the early modern era by the French kings, the region has preserved many of its ancient customs, the language, cuisine, the tradition of wine making. Born here in the 1950s, Tita, the heroine of Marie Houzelle’s eponymously titled novel, inherits this rich culture at the moment of crisis.

After World War II, life in a small Occitan community is dominated by the Catholic church and the old class structure separating the landed bourgeoisie from the farmers and day-laborers. But the depressed wine business and the growing trend for the young people to seek opportunities in the cities, outside of traditional occupations, threatens to drain the region of all lifeblood. A daughter of a wine-seller and a self-made woman who before marriage owned a beauty salon in Lyon, Tita sees her father’s business suffering from the lack of demand while her mother enjoys playacting a fashionable lifestyle. She must have a crocodile-skin handbag for her birthday; her daughters must have two first communions, the private and the solemn, each accompanied by new outfits and lavish parties. END_OF_DOCUMENT_TOKEN_TO_BE_REPLACED