This post reproduces and documents a Twitter thread that began on June 3, 2020, with articles by Aisha Powell, Sarah Valentine, B. Amarilis Lugo de Fabritz, and Jennifer Wilson. Various members of the Eurasian Studies community gradually added to the thread, creating an informal list of resources that, while useful, would also be ephemeral and difficult to find if left on social media. Here, in Punctured Lines’s more easily searchable archive, these resources are available for you to use and remix through a Creative Commons Attribution 4.0 International License. This license applies only to the tweets by Hilah Kohen below and not to any of the content linked to them. You can use the license to create your own version of this resource list for a specific community or publication.

Woe from Wit by Alexander Griboedov
Translated by Betsy Hulick

Back in 2018, I reviewed a fascinating book for Shiny New Books called Death of the Vazir-Mukhtar by Yuri Tynianov. That book was a fictionalised retelling of the life of an intriguing Russian author Alexander Griboedov; a friend and contemporary of Pushkin, he’s probably best known for his play, “Woe from Wit”. So when I heard the that Columbia University Press were bringing out a shiny new translation in their wonderful Russian Library imprint, I was very keen to explore it! Reading plays is not something I do on a regular basis; however, this is the second in a fairly short space of time (as I loved my re-encounter with The Government Inspector back in November). Must be something to do with the Russians… ;D 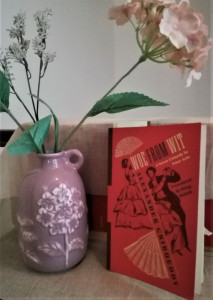 Griboedov had a fascinating and ultimately dramatic life; as well as being an author…

I’m celebrating Juneteenth today by reading Ijeoma Oluo So You Want to Talk about Race. Though I’ve lived in the US for almost 24 years now, I’m still uncomfortable with the conversations about race. Most of the time I deflect to the territory where I feel myself more confidently — literature or “the international angle” (aka Russia). Though obviously conversations about race are hugely important in literature, there’s no good reason to shirk them in other areas of my life. As a writer and a workshop leader, as an editor and a blogger, I have to own the white privileges that I have and educate myself about the ways of supporting and amplifying the voices of the Black writers in my community and participating in other aspects of anti-racist work. So grateful to Oluo, Ibram X. Kendi, and other Black and Brown writers for their instructive and powerful books.

This Wednesday, May 27, I will be sharing a story or two and answering questions over Zoom as a part of the brand new BunkerLit reading series. I would love to see you there at 5 pm Pacific / 8 pm Eastern — join the live meeting here.

Some of my best writing has originated from prompts. Writer Daniel Levin Becker, a member of OULIPO, has provided at least two of them. The most recent piece was for the column he’s doing at The Believer Magazine called Distancing: A Homebound Registry of Other Places and Times and the Albums That Take Us There. Here I wrote about being twenty and feeling lonely as an international student on the campus of Rochester Institute of Technology.

Sheltering in place is making me sentimental, I fear. This conversion project has been on my to-do list for a decade, and suddenly I’ve made the time for it, so now I’m listening to Goodbye Yellow Brick Road and it’s 1999 and I’m on the campus of Rochester Institute of Technology, a former farm that still sounds like a farm at night. I can hear all kinds of insects whose names I don’t know in English or in Russian, because—well, this is a different continent from the one I grew up on, and surely these are different insects. I have no idea. I’m studying business. It’s July, two in the morning, and I’m circling the athletic field with headphones in my ears.

Read the rest of my essay and don’t miss the other pieces in this column, taken together they make for an amazing musical mix.

I recently posted a review of Marie Ross’s recording of Brahms’s Clarinet Sonatas and Trio, and now World Literature Today published my profile of Marie Ross where she talks about her journey to this recording and the problems she’s encountered on the way. She’s got such a fascinating story to tell.

Until recently, Ross says, musicians studying historic performance overlooked the late Romantic period. Brahms died in 1897, removed from our time by only a few generations of players, and many believe that contemporary performing practices and instruments have only Brahms Brahms wrote his four clarinet pieces for chamber ensembles late in his career, in 1891 and 1894, having already declared his intention to retire from composing. He was inspired to write these works after hearing Richard Mühlfeld, a clarinetist whose sound he found particularly warm and expressive. To approach Mühlfeld’s sound, Ross found clarinets made by a legendary German maker, Oskar Oehler. She uses two instruments, one that was made in the 1890s, and the other in 1905. The latter instrument has ties to a musician in the same orchestra in which Mühlfeld also had played. Mühlfeld, Ross says in the liner notes to her CD, is on the record for recommending Oehler clarinets.

Read the review online, and buy the CD. Buying the music is the best way to support our recording artists!

In the approximately month and a half that California has been on lockdown, I have barely read anything. This seems counter-intuitive, since I basically read for a living. It also feels like a particularly vulnerable admission, given how much of my personal identity is tied to being a serious reader of “high” literature; not reading feels like failing somehow. But all I’ve managed in the last few weeks is Pushkin’s very short “Пир во время чумы” (“A Feast in Time of Plague”) because it was mentioned on Twitter, a few pages of Proust’s Swann’s Way (thanks to a Twitter reading challenge), and skimming the Chekhov stories I’m teaching this quarter (which I’ve read many times before because I would never skim for teaching. Just to be clear.). My concentration, which was bad even before the pandemic, is abysmal. Zoom has taken over my life. I spend too much time on…

Huge thanks to Rita Chang-Eppig for organizing and leading this delightful conversation for GrottoPod about the joys of reading across borders and languages. Tune in here or find us on a podcast reader of your choice!

“What can international literature teach us about our collective past, present and future in these chaotic times? In the latest GrottoPod Gabfest, producer and Grotto fellow Rita Chang-Eppig talks to Jesus Francisco Sierra, Mathangi Subramanian and Olga Zilberbourg about the appeal of international literature, its necessity in our increasingly connected world, and our favorite authors and books, including Akram Aylisli’s Farewell, Aylis! (translated by Katherine E. Young), Perumal Murugan’s One Part Woman, Wendy Guerra’s Revolution Sunday (translated by Achy Obejas), and Yoko Ogawa’s Revenge (translated by Stephen Snyder). “

I’m delighted to see my review of Margarita Khemlin’s powerful novel Klotsvog in Lisa C. Hayden’s translation up on The Common. Huge thanks to Nina Sudhakar for editing.

The piece is available online for free, and I urge you to spread the word, subscribe, and donate to this wonderful publication that focuses on writing of place. And they pay their writers, too!

“The year is 1950 in Kiev. A twenty-year-old college student, Maya Klotsvog, falls in love with her professor, Viktor Pavlovich. He’s eight years older and married. One day, the professor’s wife, Darina Dmitrievna, catches up with Maya at the tram stop and reveals that her husband loves Maya and has asked for a divorce. He wants to marry Maya and have children with her. But Darina Dmitrievna adds something else: “You’re Jewish and your children would be half Jewish. And you yourself know what the situation is now. You read the papers, listen to the radio. And then that shadow would fall on Viktor Pavlovich himself, too. Anything can happen. Don’t you agree? Babi Yar over there is full of half-bloods.”

Posted this week on Punctured Lines!

Less well known is Lorde’s essay “Notes from a Trip to Russia” that opens her book Sister Outsider. A footnote to this essay explains that Lorde spent two weeks in the Soviet Union in 1976 as an American observer to the African-Asian Writers Conference sponsored by the Union of Soviet Writers. Having returned from that trip, she finds herself haunted by it in her dreams, including a…